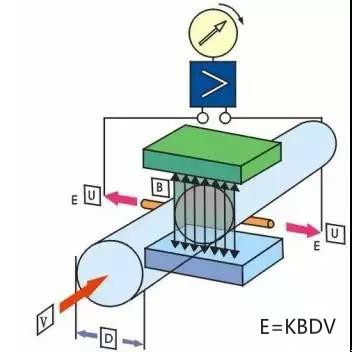 Structurally, the electromagnetic flowmeter consists of an electromagnetic flow sensor and a converter. The sensor is mounted on an industrial process pipe. Its function is to linearly convert the liquid volume flow value flowing into the pipe into an induced potential signal and send this signal to the converter through the transmission line. The converter is mounted not far from the sensor, it amplifies the flow signal sent by the sensor and converts it into a standard electrical signal output proportional to the flow signal for display, accumulation and regulation control.

It can be seen from the above formula that the volume flow rate qv is linear with the induced electromotive force e and the inner diameter D of the measuring tube, and inversely proportional to the magnetic induction intensity B of the magnetic field, independent of other physical parameters. This is the measurement principle of electromagnetic flowmeter.

It should be noted that in order for the formula (1-3) to be strictly established, the measurement conditions must satisfy the following assumptions:

2 the flow velocity of the measured fluid is axially symmetrically distributed;

3 The liquid to be tested is non-magnetic;

4 The conductivity of the liquid to be tested is uniform and isotropic.